The end is almost complete.  Most great institutions often crumble from within, and that is exactly what we are seeing with American evangelicalism.  For so many years we evangelicals have warned about the evils pressing in from all sides.  Hollywood is eroding our Christian heritage!  Planned Parenthood is the devil incarnate!  Liberal judges will take away all our religious liberty!  But apparently, while we were all out hunting dangerous wild animals, we've let the foxes guard the hen house.

How can so many of our Christian and evangelical leaders continue to be avid and vocal supporters of Donald Trump?  I am confused by their justifications, disgusted with their excuses, and baffled by their rationalizations of supporting a man who is racist, lecherous, misogynistic, disgusting, petty, and crude.  He is a liar.  He is arrogant. He is a cheater. 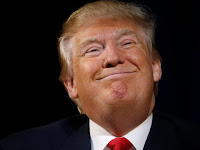 But most of all, Trump is a pervert.  I can use no other word to describe a man who revels in his sexual conquests, cheats on his multiple wives, objectifies women's physical attributes, jokes about sexual assault, and frames his relationship with his own daughter in sexual terms.  I haven't listened to all the recent tapes, I only know the snippets that I have read in the news.  But that is enough.  More than enough.  You don't need to take the lid off the garbage to know it stinks inside.

But none of that seems to matter.  And that is deeply disappointing.  Oh sure, we give appropriate lip service. Robert Jeffress, pastor of First Baptist Church in Dallas and a member of Trump's Evangelical Executive Advisory Board (really?), said the comments were "lewd, offensive, and indefensible."  But of course, he's still voting for Trump.  I guess they are a little bit defensible after all, eh Mr. Jeffress?  Tell me, what happened to traditional family values?

Many of the Christian leaders who are supporting Trump were scathing critics of Bill Clinton's moral failures.  In September of 1989, James Dobson wrote, "What has alarmed me throughout this episode has been the willingness of my fellow citizens to rationalize the President’s behavior even after they suspected, and later knew, that he was lying.  That disregard for morality is profoundly disturbing to me.  What are they learning from Mr. Clinton? What have we taught our boys about respecting women? What have our little girls learned about men?"  Amazing.  The irony would be laughable, if it wasn't so pathetically sad.

Where are the men of our faith?  Where are the men who will stand up and say, this is wrong?  Excuse me, but you don't "nudge, nudge, wink, wink" sexual harassment.  You just don't.  So I have to question the integrity and sincerity of any man who continues with the facade that this is somehow OK, and Trump is the only choice for the discerning Christian.

So, do the one-in-six women who have been sexually assaulted even matter in all this?  Or are they simply necessary collateral in our hell-bent desire to keep Hillary out of the White House?

Let's be clear.  This is not about Hillary Clinton.  This is not about potential Supreme Court nominations. This is about refusal to be the gatekeepers of truth and integrity, as we are called to be. Is God not in control?  Is He not sovereign?  Do you really think he is up there pacing back and forth with a furrowed brow, wringing his hands in fear of a Hillary Clinton presidency?